So, unless you’ve been living on Mars for the last couple of years, you’ve definitely heard about Chalk Paint.

But …. What is Chalk Paint?

Well, in recent years there’s actually been a lot of controversy about what Chalk Paint®  is.

Maybe you’re fully aware of the wrangling or perhaps it’s gone completely over your head.  I wouldn’t be surprised if you were utterly oblivious as it was only when I started my own brand of furniture paint that I become aware of this polemic.

So here’s the deal.

Annie Sloan is the ONLY person on this planet (well a lot of countries anyway) that is officially allowed to call her paint, Chalk Paint®.  That’s because she trademarked the words … chalk paint (see that little capital R?).  Here’s how Annie explains it herself:

“Although whiting, calcium carbonate, calcite, chalk, lime and other similar substances have been used to make paint for hundreds of years, there has never been another paint called CHALK PAINT before.  Besides, the CHALK PAINT brand name has nothing to do with my ingredients.  It’s all about the finish.”

So let’s look at the last sentence again. “Besides, the CHALK PAINT brand name has nothing to do with my ingredients.  It’s all about the finish.”

In other words, Chalk Paint® is called chalk paint because it contains chalk; it just describes the finish  … chalky or chalk-like.

To risk legal action or not?

There are a lot of companies out there that still use “chalk paint” in their name or when describing their paint but, in all honesty, I’m hoping that people will start to see that it’s not about the “chalk” at all.

Annie Sloan and her legal team have made great efforts in enforcing the trademark.  They’ve closed down Facebook Pages with the word “chalk paint” in their name and Annie Sloan and her distributors got into a huge legal battle with former Annie Sloan Unfolded employee, Kathy van Gogh who left the company and set up her own decorative paint called Van Gogh Chalk Paint.

Annie Sloan won her case and  we’re not here to argue with that. There’s plenty of room in this World for all different types of matt, no prep, furniture paint that has a chalky finish.  They don’t have to be called chalk paint.

This was all going on when we were setting up our furniture paint range. That’s why it says “Chalky Paint” on the label.  The problem is, Annie Sloan Chalk Paint® is so hugely recognisible that, people looking for a no-prep paint to re-vamp their furniture search for a product that is called Chalk Paint but we didn’t want to get into trouble either!  It’s what’s known as a generic trademark. 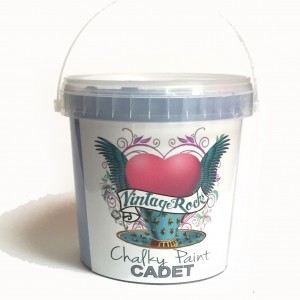 So when you hear (or see) me talking about Vintage Rocks paint as chalky paint or even just furniture paint, you’ll know exactly why!

And for the record, I have trademarked the name Vintage Rocks® … mainly because I wanted that cute little ® after the name 🙂

Let us know what you think.  Do you specifically look for a “CHALK PAINT” to use when upcycling furniture?  Leave a comment, we’d love to know your opinion.

In the meantime, I’m off to Hoover® My stairs 😉